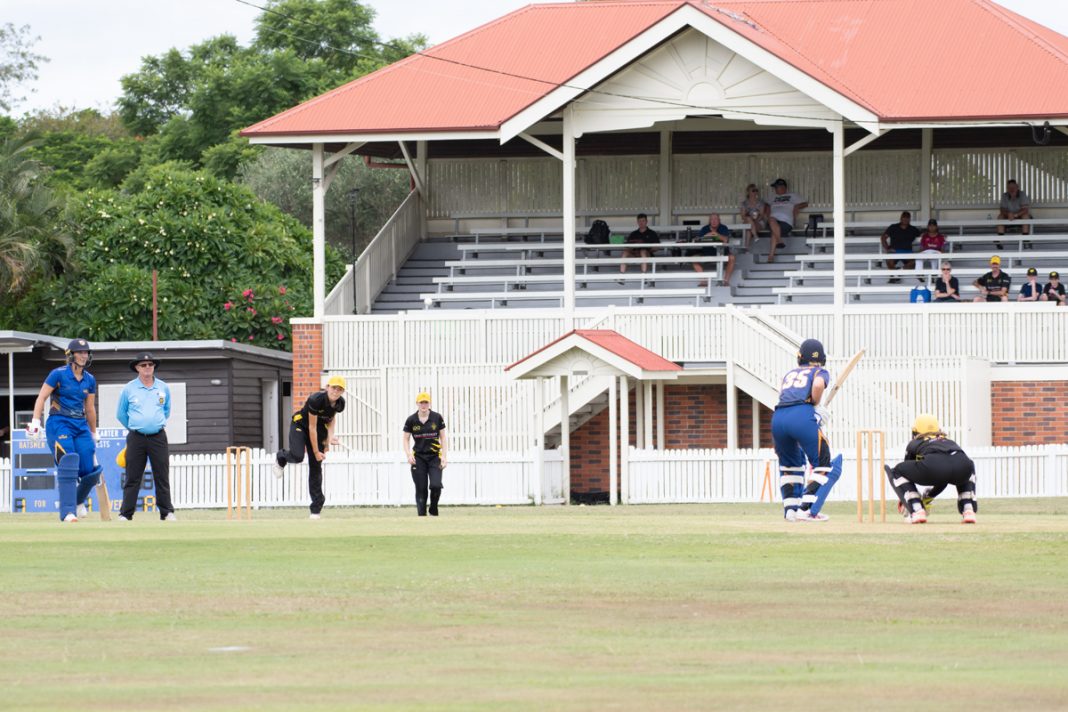 Wests entered wins into the season logbook for both women’s grades this weekend with both first and seconds victorious over Sandgate-Redcliffe. The wins keep both of our teams in the hunt for finals qualification with only two more rounds to go!

Wests were invited to bowl first by Sandgate-Redcliffe and accepted the challenge with alacrity when Holly Ferling captured the wicket of gun opener Georgia Voll caught behind in the first over.

Sandgate-Redcliffe steadied under the experienced hands of Tess Cooper and Beth Mooney before Beth retired after nine overs and Lilly Mills took her place at the crease. Ashleigh Sims had Tess caught by Annie Wikman soon after with the score on 61. Wickets feel regularly to Ash and Jess Bryant despite dogged resistance by Janelle Pais and Darcy Johnson in particular until Beth Mooney returned in the 36th over and pushed score to 175 before being dismissed in the 45th over for a stylish 80 off 59 balls.

Ashe Sims captured four wickets for the match which pushed her to a season tally of 37 wickets – a new Katherine Raymont Shield record for wickets captured during the regular season games!

Wests batting began positively and progressed to 72 in the 13th over before Holly Ferling (53*) joined Courtney Sippel (56*) in the middle and they shared an unbeaten 104-run partnership for the fourth wicket which took the team to victory in the 32nd over.

After Sandgate-Redcliffe won the toss and elected to wield the willow first, Wests girls put on a fantastic bowling display to dismiss the visitors for just 59.

Lilli Hamilton took the early wicket of opener Katherine Wheeler putting Sandgate Redcliffe under early pressure with the score on just 7. Olivia Totten followed up soon after, catching Sevi Kaur off Isabel Goffage’s bowling with a magnificent snaffle of the pill over her shoulder while running toward the boundary.

Wests batting was anchored by Isabel Goffage (23) and Ky Crump (12*). They girls scored steadily, but lost wickets regularly which restricted the run rate. A late cameo featuring aggressive running by Holly Walker in combination with Ky Crump pushed the total past Sandgate-Redcliffe’s mark in the twentieth over and secured a double bonus point win for the Wests girls.

Well done on a solid win girls and good luck against Ipswich next week.