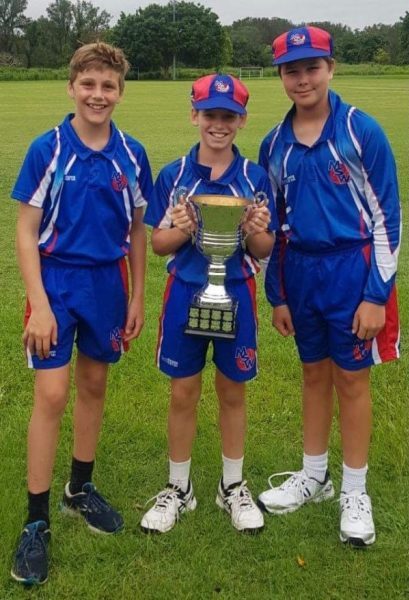 Following on from the success of the MSW U12 QJC side back in December, the 2021 MSW cricket season has continued in a positive way for three more of our U12 West’s Juniors with the Ian Healy Cup being hosted by Brisbane North Cricket from 4-8 January, 2021.

Joshua Ward, Cameron Lossberg and David Skipwith are three of West’s up and coming stars, working hard each week to develop their game and giving 100% for their club.  These three boys were selected to be part of the MSW Blue team for the Ian Healy Cup this year and, along with their MSW team mates embraced the opportunity as the Blue team were aiming to win the Ian Healy Cup three years in a row.

After dominating in all their trial matches prior to the carnival and training hard they turned up for the first day of competition fired up and ready to give it their all.

The boys played so well as a team and came away with 3 wins over the first three days which lined up a match on Thursday against Brisbane North to qualify for the Grand Final and Friday.

It was a rainy morning and the pitch was slippery but the whole team did well, Cameron Lossberg doing his job at the top of the order to retire not out.  The coach decided to send David Skipwith in a couple early to hit big against the spinners after his success the day before.  He handled the situation very well and embraced the opportunity before losing his wicket, he did his job to add to the every increasing team total before Joshua Ward came out and started hitting big to pile on the runs and retiring not out.

The boys ended up coming out and bowling them all out for 80 and put on 254 runs to reach the Grand Final on Friday.

We were facing Bears Gold on Friday for the final and it was a wet, drizzly day but we won the toss and chose to bowl.  After a big rain delay the Umpires decided to reduce it to a 20 over match and we only had 49 to get.  Our openers went out and reached the target without losing a wicket so our West’s boys didn’t get the opportunity to bat again but they bowled well and kept the runs down.

It was a great week for our boys, playing alongside their MSW team mates and with boys from other clubs that they usually play against.  It was such a wonderful thing to see them form friendships with everyone and develop their game under the guidance of a wonderful coaching and management team.  Well done to the other MSW clubs UQ Cricket, Kenmore Cricket, Souths Junior Cricket and Wolston Park for developing such talent.  MSW is looking good in the Junior ranks.