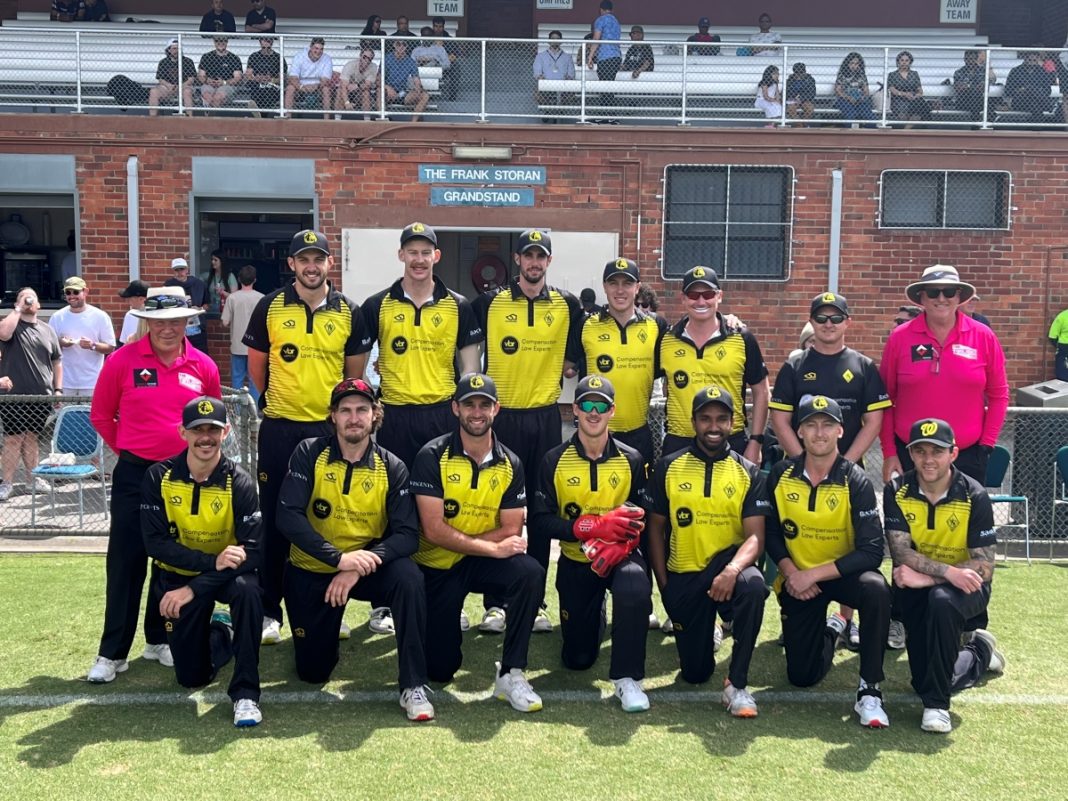 Wow what a weekend for our club. The moment could not go by without special mention.

A club Championship Trophy with our brilliant Taverners group, who last year won the inaugural Taverners T20 crown and this year won the Taverner one day cup. 5 men’s grades including Tavs completed the weekend with wins and our steadily improving Womens 2nds again held their nerve to notch another great win.

The U17 Taverner was a match dominated by our boys. Batting first our openers held strong against the new ball before captain Jack Sonter and Michael Neumann combined for a 115 run stand to take the wind out of Valleys sails. Michael Neumann departed for a strong 45 but Jack Sonter continued to be second last man out just 10 short of a century. Sohaan Sharma came in for a handy 20 off 16 which allowed Wests to set a very completive total of 6/211.

Wickets started to tumble starting with a run out from Jack Matthews followed by 6 wickets falling to spin followed by Lossberg chiming in to dismiss the dangerous Morris. Wickets fell in steady succession with the Wests boys not taking the foot off the pedal. Kye Martin finished with an impressive 4/17 off 10 and Valleys were bowled out in the 39th over for 104.

A comprehensive final series with a team that dominated the season. Importantly they hit their peak at the right time for finals. All boys contributed at some stage during the season and the finals so this was a true team/squad effort. The Daves, Lossberg and Pamenter, have been instrumental in guiding this group and it has been a joy to watch their team’s development. It all bodes well for our future men’s grades with his lot coming through.

It didn’t stop there.

Wow what a performance – a Club/A Grade record, I believe.

Firstly bowling out Toombul for 127 on day 1. Nick Purser an unbelievable 5/24 hat trick, his first for the club, and now the clubs all tie leading wicket taker at 602 wickets. This guy is one of our clubs legends and we salute you Nick. Brilliant. Don’t forget social media guru, Dan Rebetzke’s 4/21.

But it didn’t stop there. With captain Luke Donaldson sniffing a victory here, Sam Vaughey and Ollie Peck set about what would be a club sixth grade record partnership of 241 before Ollie was removed for 108. Ollie was playing his second game of grade cricket and his first bat, the future is bright for the 15 year old. Sam Vaughey continued smashing them and leaving the wicket with a massive 202 off 155 balls. This is a record for 6th Grade in the whole competition. With the score at 3/337, youngsters Sohaan Sharma and Zac Olsen didn’t want to be left out assembling a partnership of 86 with Sohaan finishing on 58 off 89 and Zac a run a ball 51. Declaring at 4/426 and calling it a day. Wow what a day. Big congrats to this group.

Completely dominated the game against grand finalists Ipswich. With a first innings highlighted by centuries to stand in captain Steve McGiffin and Josh Del Simone, Wests managed to declare early on day 2 at 7/352. Wests then completely dominated with the ball with Whitney and Edwards breaking up the opening group and the Giff destroying the middle order. When it looked like former Bulls opener Lachie Pfeffer could resurrect the innings an astute bit of captaincy bringing on the leg spinner Luke Penn proved a master stroke, dismissing the dangerous Pfeffer. Ipswich bowled out for 74. Wests took to a second innings in the hunt for extra bonus points. Snell and McGiffin having some fun smashing 41 and 83 no respectively. Ipswich saw out the day at 0/18. The win maintains 1st grades dominance at the top of the table.

Wests took on a star packed Endeavour Hills Cricket Club including Chris Gayle, Dimuth Karunaratne, Thilakranthe Dilshan, Lahiru Thirrimanna, Shoaib Malik and Luke Proctor. Wests fielded first and produced a steady run of wickets with Chris Gayle dominating the other end. With balls flying all over and out of the park Wests held their nerve with Watto getting Dilshan. Arjun then cleaned up Karunaratne followed by Malik to Watto. 3/50 off 7 with Gayle 32no. Commentary from our management team Dan “Hanger Shiraz” Maroske and Paddy “I can run faster between wickets than Gayle” Collins is that Gayle is definitely the universe boss. A great outfield catch by Dennien dismisses Taylor and the home team ends its innings at 4/167 off 20 with Gayle an impressive 95no.

Wests take to the crease at a blistering pace with Beath and Simmons, losing Beath early but enter the timeless Steve Paulsen, proceeding to smoke as straight ball and unfortunately Jaydyn Simmons run out. 2/33. Paulsen and Giff proceeded to dominate. Taking the score to 3/145 off 14.4 before Giff lost is wicket for 45. The weather started to close in and Steve just kept smashing and after 16 overs victory was in sight at 3/154. Steve and Arjun saw us home with balls to spare – an used of major proportions but the class of Paulsen and Wests shone through with Paulsen reaching 84no. A great victory under difficult conditions and Wests continue to show we are a T20 and a two day force around the country. A bg thank you to Dan Maroske and Pat Collins and of course our T20 coach Nathan Dodd.

A very exciting win and one the boys have been desperate for this season. Bowling first Wests contained Toombul to 210 with Singh picking up three vital wickets and Thommo and the club legend Jimmy Mitchell picking up 2 important wickets each. Batting has been this group’s weakness but a great opening stand between Ollie Dickinson (49) and Mikey Wilson (49) put the team on the right track. Steady partnerships followed but so did wickets keeping Toombul in with a sniff. At 6/191 things were good but then a nervous slide took over when Stevenson was dismissed with the score 9/208, the wobbly boots were on. Fortunately we managed, with the confidence of Liam Johnston, to get home. An important win for Harry Borger’s boys.

With a competitive score of 183 with contributions from Virender Singh (30) and Lachie Biggs (43) with over order contributions from Sam Arnott and Lachie Brennan, Wests were in a good position to win this match. Nathan Kerr and Sam Arnott then tore apart the Toombul line up with Kerr peeing off a 6/30 off 17 overs!!!!! 4th Grade continue to move u the ladder with solid performances. Great results Lachie!!!

This side under George Seaward and Ben Maddox’s guidance continue to build. Posting a competitive 7/138 with Scarlett Varidel (39), Taylor Hamblin following up her 100 last week also scoring 39. A competitive score but requiring a disciplined bowling and fielding session to bring home this game. That is exactly what happened and Souths fell to 6/60 following regular wickets. Souths rallied a little and at 7/103 things were getting tense but Taylor Hamblin picked up a vital wicket followed by Ash Oates wicket and the game was back on track, finally dismissing Souths for 109. Erin Moran continues to shine with 4/32 and Ash Oates two wickets were vital. Great job coaches and girls. The girls sneaking closer to that top 4.

2nd Grades men’s great rally in week two showing that resilience under Tom Pappalardo’s captaincy. After a poor first week to rally the way we did hosting solid second innings response showed some ticker. Danny Young a resolute innings at the top of 77 and Tom again leading the way whit yet another 50.

For Mens 5th that remain top 4, next week in another game and Women’s 1st grade are down a few players but continue to coat. Keep up the fight.

Well done Doggies, what a weekend!!!!!