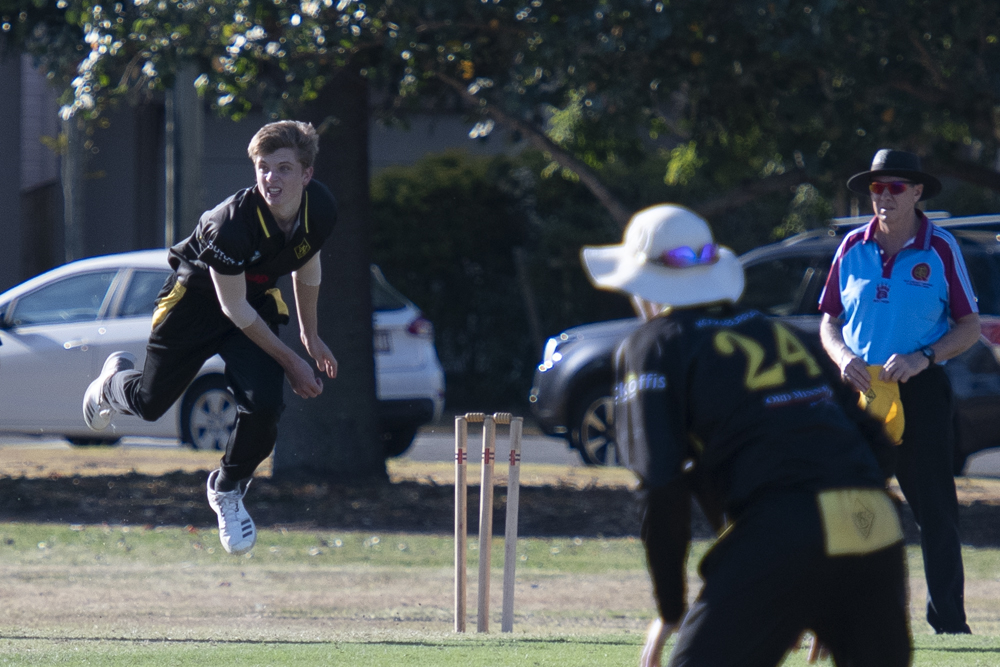 The first full round of the year got underway on the 21st of September with first through sixth grade competing against Norths with third to sixth grade playing their first game of the season. Only a couple of bright spots across the six teams as we look toward the first 2 day round of the year against University.

Norths won the toss and elected to bowl. We batted well in patches, with Paulsen scoring 54 and Sippel scoring 46, but lost wickets constantly throughout the innings. We were restricted to 223 after 48 overs. Norths chased down our score in 38 overs 4 wickets down. Aiden Watterson took two wickets, Steve McGiffin and Blake Edwards took one each. Brendan Smith led the way in the field again taking 3 catches. – Paddy Dooley.

West’s Lost the toss and got sent in on a tricky Graceville 2 wicket. Josh Del Simone steadied the ship after a shaky start with a crafty 54. West’s finished at 9/181 after 50 overs. Our bowling had to be tight and after a nice opening spell by Tom Whitney and Darcy Murphy, West’s restricted North’s to 140 after 38 overs. With some special plays in the field from Sam Dennien and Lachie Bell; this lifted the mojo of the boys. Pick of the bowlers was Sean Seaward with 3 wickets. A great win for the boys, with finals around the corner. – Zac Beveridge

Wests 3rd Grade suffered a defeat after a good start with the ball. Norths were 3/60 off 20 at drinks, but were able to push to 8/189. Nic Vellacott took 2/30 off 8 overs and effected a run-out. Nic was also the best with the bat, scoring 26 off 26 balls, as Wests were bundled out for 107. The middle order were given too much to do, and not enough time, after each of the top four got set then got out. – Trent Kenny.

Round 1 of the 2019/20 season saw 4th grade take on Norths away from home. After winning the toss, Norths elected to bat first where we were quickly in the game with Luke Thompson jagging a run out in the second over. Despite restricted Norths runs in the power play, dropped catches and poor fielding allowing them to settle into their innings, scoring at a strong run rate in the final 20 overs. At the conclusion of the innings, Norths were 5/223 with Thommo and Cameron Stewart the pick of the bowlers.

With a tough chase ahead, our openers got off to a solid start not losing a wicket in the powerplay – led by James Van Niekerk scoring a gritty 27. However, as the required run rate grew, wickets started to fall despite most batsmen getting starts. Eventually, we were bowled out in the 39th over for 181 – 40 odd runs short of Norths target. While we rued missed opportunities in the field and slow scoring with the bat, credit must go to Norths who played gritty cricket with both the bat and ball. – Harry Borger

With Dunlop being its usual tricky self, the toss was crucial to win…and win we did, extending the 5’s record of 11 wins from the last 12 tosses now. Sent in, Norths were in trouble early thanks to 2 early wickets from Steve Gramenz and Luke Peff leaving Norths 2/11. From there Norths got a run on and put on 95 for the 3rd wicket before Jordan McNally got the break through with Norths now 3/106. From there the bowlers knuckled down and Norths were rolled for 140, losing 8/36 and even better still, 7/16. Gramenz was exceptional and did the bulk of the damage, finishing with 5/8 off 7.3 overs, 4 of those wickets coming in 9 balls and for just 3 runs. He was well supported by Jacob Elmer who finished with 3/35.

Wests started beautifully with the bat, with runs coming quickly however, there was a stutter in the middle losing 3-6 leaving us at 6/118 and slightly nervous of a Norths like collapse, but Zac Camilleri had other ideas and guided us home, finishing with brilliant 54no. It would be remiss of me not to mention the winning runs coming from a long bomb by Gramenz to round off his brilliant day. – Robert Butler

On a cracking day to start the season we lost the toss and were in the field to start the season. The bowling starts as it did all of last season, with Nick Purser bounding in with the breeze at his back. Nads was his usual self, keeping it tight through his first spell of 5 overs before being rested to bowl at the death. He finished the day a little light in the wickets column but with another typical performance of 0/19 off 8. The other end had its problems however, the skipper started the season off slowly being sent back over his head a few times to collect the ball from the other side of the fence. The performance would drop from there, with poor discipline in the field and rusty bowling turning 5/115 at drinks to 7/202 at the end of the innings. Nick Wood bowled very well in his return to cricket and Lachlan Schubert picked up a couple of wickets at the end of the innings.

The batting has long been the problem that has held Sixth grade back across the years. Jamie Lovell returned after missing the second half of season with shoulder problem to partner Matt “Survivor” Dyson at the top of the order. The boys got away to a quick start before Dyson was knocked over and a small collapse began. Karan Pal in his first game for the club ran himself out and Tim Sedl was caught behind off his thigh pad. The innings was steadied somewhat by the unlikely source of Callum Pendlebury and Nick Wood who continued a cracking return to the game. Nick Purser tried to save the game late but unfortunately it was too little too late as we fell 57 runs short. Proof that being good in the field can win you a game. – Luke Donaldson