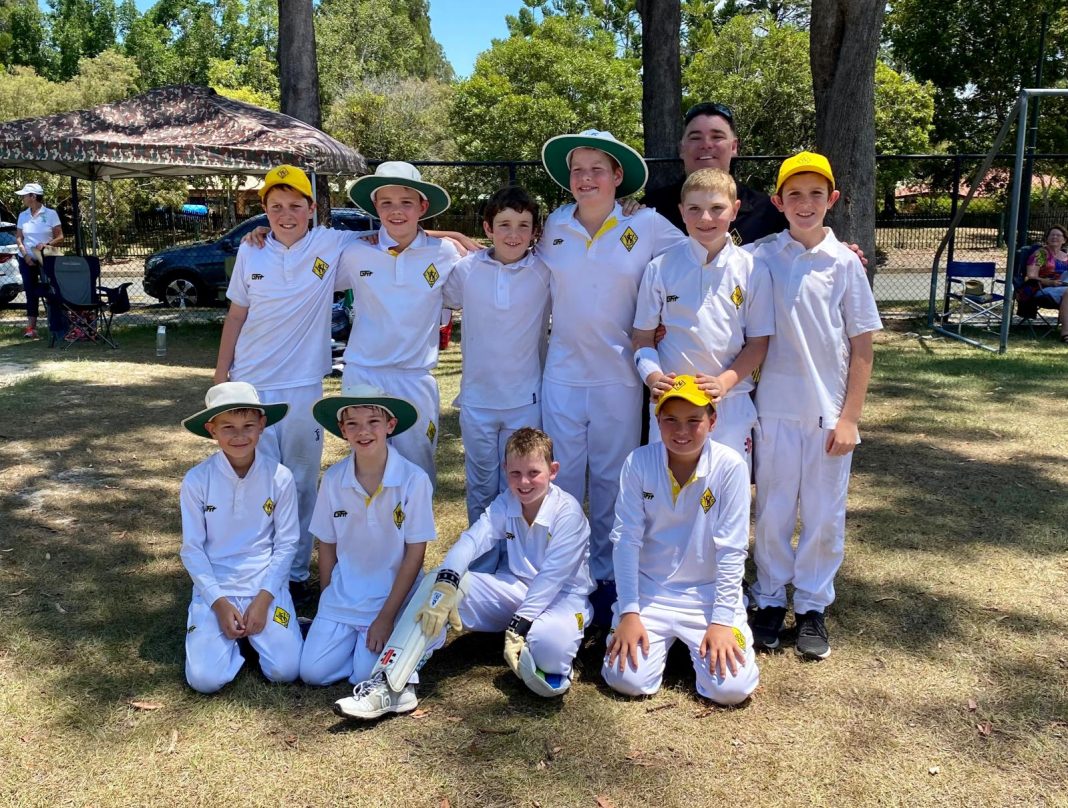 The West Stars in the Flag Development league are a team made up of boys from 9 to 11 years of age. Most of the boys played together last season, but there were two newcomers who have been a vital part to the team’s recent success.

Sid Dawson brings a passion and knowledge of the game that not only saw him handed the captain duties, but also the ability to coach and improve every single one of his teammates through positive interplay in regards to field positions and game day tactics. He also had the honour of winning the toss in all 9 games!

Harry Pirie made the smart choice to hop over from Kenmore and make an immediate impact with 3 wickets in the first match. Harry is a true all-rounder who could be trusted with the bat, ball and also in the field.

This season, they often played teams that were older and more experienced but that didn’t stop the team from gaining the ascendency on the scoreboard.

It started all the way back in October. The 1st game saw the Stars face a strong UQ Hurricanes outfit. Harry Pirie ripped through the opening partnership, taking 3 wickets for 7 runs. The Stars then stacked on 116 runs to win by 42 – Ben Lindsay top scored with 20* off 20.

Round 2 was a complete team effort with the bat and the ball. St Lauries Red were kept to 92 runs with miserly bowling and an attacking field. Zach Vassie, Toru Howard, Matt Lindsay and Sid Dawson all took a wicket. The Stars then piled on 217 runs in 24 overs with Zach Vassie starring with the willow, whacking seven 4s to bring up 32 runs off 20 balls.

Rain ruled out round 3, but the weeks rest proved handy. Round 4 saw the Stars rack up a 110 run victory over the Kenmore Kingfishers. Winning the toss, Captain Sid sent in the batters. Despite all players keeping the run rate ticking over it was Sid who top scored with 25* off 25 with three 4s. The 146 runs were made all the more impressive after they constricted the life out of the Kingfishers allowing only 36 runs. Harry Pirie again made the ball dance, taking 2 wickets without conceding a run off 4 overs. Riley McAuliffe-Winton, Toru Howard and George Stewart all took important wickets.

Round 5 was marked in on the calendar at the start of the season for both teams. It grew in stature, as both Wests teams were still undefeated. The final score would reflect the high quality of the contest. The Stars batted first and knocked up a respectable 141 runs, including three strong innings from Zach Vassie, 31* off 47, including three 4s, Ben Lindsay, 29 off 39, including two 4s and Sid Dawson, 26* off 39, including two 4s. Coach Stewart had done his homework and the Stars were well aware of the heavy hitters the Bulldogs had. And heavy hit they did. Particularly Jack McGown who blasted 35 off 39 balls. The Stars proved too good in the end, winning by 10 runs in what would be the first but not the last time the Stars were seriously challenged. In a high scoring game, it was the economical Lachlan West who shone, taking 1 wicket and leaking a stingy 7 runs. Riley McAuliffe-Winton, Zach Vassie and Harry Pirie all took impressive catches.

The Stars opted to bowl first in round 6 against the Souths Bushrangers. The line and length of every bowler was switched on and Souths struggled to get runs, limping to 77 runs off 30 overs. The bowling economy of the entire group was evident with Matt Lindsay, taking 2 wickets for 13 runs while older brother, Ben, took 1 wicket for 3 runs and Riley McAuliffe-Winton, 1 for 5 runs. Both Lindsay brothers also held a catch each. For the first time in the season the Lindsay boys opened the batting, while their poor father watched on in a tangle of nerves. The nerves proved unfounded as they hit the two top scores, Ben, 16* off 15 and Matt, 15 off 15. The rest of the Wests line-up had a go and eventually retired after 17.3 overs and 138 runs to bring up the win.

Round 7 against St Lauries Orange proved a run fest for the Stars. Piling on a season high 346 runs in 30 overs was a delight to watch for the crowd. Plenty of batters got a start, including George Stewart (20* – four 4s), Toru Howard (20 – three 4s), Ben Lindsay (26* – five 4s), Sid Dawson (34* – four 4s) and Zach Vassie (22* – three 4s). But the beast with the bat was Harry Pirie, belting 61* off 41 balls, including an impressive twelve 4s. The St Lauries batters hit an honourable 135 runs but were never in danger of chasing down over 11 runs an over. Harry Pirie snagged 2 impressive LBW’s and Lachlan West and Matt Lindsay also took 2 wickets.

The Kenmore Krocodiles were undefeated through the opening 7 rounds, so there was certainly a buzz at the ground as the two top teams warmed up for their round 8 clash of the titans. Coach Stewart gave his last minute run down to his batters about needing to score runs, but also respect their wicket. Again he sent the Lindsay brothers in to open the batting and they did not disappoint. Matt Lindsay scored his season high 25* off 24, including three 4s and was followed by the successes of Sid Dawson (24* off 20), Zach Vassie (20* off 20), Harry Pirie (16* off 20), Riley McAuliffe-Winton (19* off 20), Toru Howard (20* off 20) and Luke Dernier (17* off 20). But it was Ben Lindsay who had retired earlier who stole the show. He was lucky enough to head back out to the crease and swung for as many runs as he could manage, including eight 4s and his first half century – 51* off 36 balls. Unsure whether the score total of 262 runs would be enough, the Stars set out to disrupt the Kenmore batters and that’s exactly what Zach Vassie did, dismissing the Krocodiles leading scorer in the 2nd over for a duck. The wickets continued to drop as the Stars smelt blood in the water and the tail was mopped up like a dim sim in a bowl of soy sauce. 3 wickets fell in the last 10 balls and the Kenmore team were held to 131 runs for a 131 run loss. Toru Howard and Ben Lindsay took 2 wickets and Zach Vassie, Matt Lindsay and Luke Dernier all took a wicket each. Toru and Zach also held onto a catch each.

In what would prove to be a season to remember for the Stars, it ended in spectacular fashion. The Stars were desperate to end on a win and the BSK Roar were hell bent on crashing the party. It was evident early on that both teams had turned up to win and it was going to go down to the wire, which it did. The last ball was the decider but let’s go back to the beginning. Coach Stewart chose to stick to the opening formula of Ben and Matt Lindsay. They put on a quick fire 54 in 6 overs before Matt was clean bowled for 11, giving Zach Vassie a chance to whip on 18 quick runs, including three cracking 4s. Luke Dernier was equally impressive with 15* off 22 balls, including two 4s. Riley McAuliffe-Winton (18* off 20) and Toru Howard (23* off 20) finished their batting for the season in style, ensuring that the Stars would cross the 200 run mark. Ben Lindsay and Sid Dawson came back in and quickly made it known they were there to score runs. Sid was eventually bowled for the first time in the season for 50 runs. That’s right, Sid scored 203 runs, only losing his wicket once all season. It should also be pointed out that as well as captain, he was our fulltime wicket keeper and in my humble opinion the best in all of the Flag Development league. With 7 balls to go and a fresh Luke Dernier at the crease, the two boys hit four 4s and Ben finished on 67* off 44 balls and eight 4s. But would the total of 244 runs be enough? The Brisbane Super Kings were not intimidated and held the run rate to over 10 for the first 4 overs. George Stewart (1 wicket for only 5 runs) and Lachlan West (only 6 runs conceded) were a thorn in the BSK side and brought the run rate to a crashing halt. With 10 overs remaining, it was obvious to all nervous spectators that this was going to be painfully close. BSK needed 13 runs off the last over to win having scored 9, 13, 12 and 21 off the previous 4 overs. Coach Stewart shocked everyone by putting in Year 3 youngster Matt Lindsay in to bowl. All six balls were hit deep on the leg side but none were allowed through thanks mainly to the run saving fielding of Harry Pirie. Four runs were required off the last ball for BSK to snatch the win. Again, it was blasted in the direction of Harry Pirie, who made a game winning stop, giving the Wests Stars the best possible outcome, a 1 run win. As Coach Stewart mentioned in his post-match talk to the team, it had been a special season for the 10 young boys, who had bonded over hard work, sportsmanship and a love of the game. This final win saw them finish undefeated and take top spot on the premiership ladder with 51 points, 6 points ahead of second place.

Grill’d Junior Player of the Week