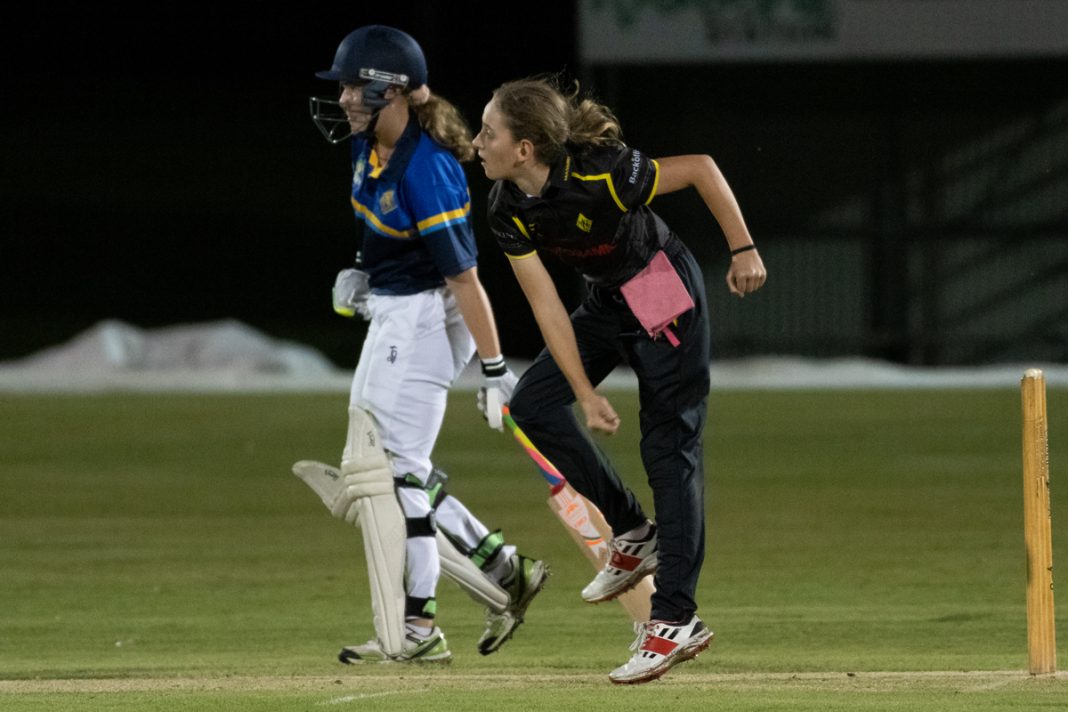 A cool Friday night and the Second Grade girls were roaring to go. After the first normal week of training in a while they were feeling as ready as ever. Captain, Emma Lockwood, won the toss and elected to bat putting in Scarlett Varidel and Courtney Home to open. The pair was split up when Courtney was unfortunately caught and sent walking, bringing in Lilli Hamilton. Her and Scarlett put up a solid partnership of 22 runs after Lilli was dismissed, closely followed by Scarlett. A couple more wickets fell but all along was the innings anchor, Rebecca Storrs, who top scored through thick and thin, getting 24 runs to her name. The Westies finished off the innings with 99 runs on the board.

To open the bowling was Erin Moran who initiated the key wicket of the match, taken by Rebecca Storrs at short mid-wicket. What a screamer it was! Not only that but soon after, another one fell and all of a sudden the Norths batsmen were dropping like flies. Leg spinner, Aya Stafford, took a whopping five-wickets in her four overs going for only eight runs! Leg spinners getting the job done once again!

It was to be a big day out for the girls coming up against arguably the most competitive sides in the Katherine Raymont Shield. They were first to face Sandgate-Redcliffe who had been historically known to be worthy rivals of the Westies women’s squad. The toss was won by the girls and Sandgate was sent in to bowl. Big gun, Grace Harris’ wicket was taken quite early in the innings sending a shiver through the camp but in went Meagan Dixon who settled down the change room for a while. However, the inevitability of a wicket came and a couple soon fell until Holly Ferling took to the crease. Her effort with the bat brought the girls to a competitive score of 105 runs.

The second innings started a bit rusty with Qld Fire rep players, Tess Cooper and Georgia Voll looking quite dangerous, all up until the fall of Tess’ wicket. Sandgate were 1 for 22 runs and the Westies were beginning to find their feet. They then took out Georgia later followed by Caitlin Mair and Lilly Mills. The game was becoming tighter and tighter until the last ball came. Sandgate needing two runs. Chipped over the keepers head and the two runs were made.

Dispite the loss, the girls showed great resilience and determination taking the game to the last ball.

Two T20s in a day is a hefty effort in itself, the girls feeling the renowned Ashgrove heat and needed to then move fields. Oh weren’t there smiles all round. Having to pack up your kit bag that has blown up making you lose your thigh pad, an inner and a set of spikes just makes the day that much better!

After an hour waiting for the start of the second game the Westies were ready for the challenge to come up against the home team. Both sides coming off of a loss put them at ease. The playing field was even.

Annie Wikman won the toss and chose to bat sending in herself and Grace Harris to the middle to kick off the innings. Grace had a fantastic hit out making 78 runs off 55 balls, setting up the doggies nicely for an easily defendable score. But it was the efforts in between that really made it possible for the girls to succeed. Holly Ferling once again swooped in and had a go making 24 off 27 balls and building the statement partnership with Grace of 85 runs. The final total on the board was 138 runs and the Westies were up for a fight. And didn’t they do just that!

Third ball of the final innings of the day, Holly Ferling steaming in off the long run, puts one wide of off stump and full which was then sliced straight to backward point and caught! The game was theirs. Even out in the middle, you could tell the Valleys change room was bleak. Next thing you know, another batsmen was sent home in the second over by Meagan Dixon. They were dropping like flies and the Westies brought it home!