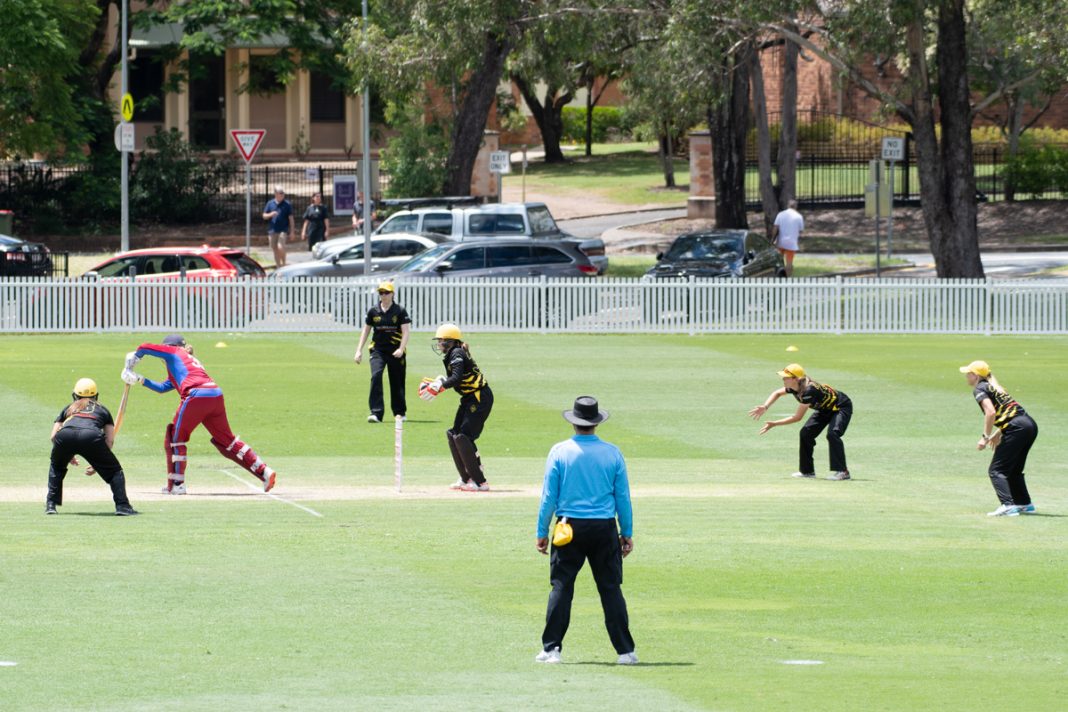 Missed it by this much!! So said Maxwell Smart about the women’s second grade match on Sunday when Wests girls went down narrowly in a table-topping clash with Ipswich Logan. The first grade women, on the other hand, posted a hefty win over cross-river rivals Uni.

Importantly, with just one more regular season round to go, both of our women’s teams remain in the hunt for semi-finals berths!

The first grade girls got the motor running early after being handed opening honours with the ball by UQ. UQ’s top order scored slowly from the outset, and their early caution came undone when Wests wicket-taking machine Ash Sims struck twice to reduce the home team to 2/10 in the 8th over.

The third wicket became a wrestling match with UQ bats Katelyn Beaumont and Lucinda Jensen pushing to the 17th over when Olivia Hartland ran out Lucinda with a forty metre direct hit. Meagan Dixon snapped up two wickets, then Jess Bryant finally had Katelyn stumped by Layla Proctor for a determined captain’s knock of 16 off 81 balls. Ash and Jess struck again almost immediately before Naiya Varidel quickly mopped up the tail, taking the last two wickets with her wrist spin.

Set a target of 80 to win, Wests racked up the runs in the twelfth over with Meagan leading the way with an undefeated 36 and Grace Harris (20) and Courtney Sippel (18*) chipping in.

The eight wicket win secured Wests a double bonus point and elevated them to second place on the ladder with just one round to go. The ladies take on the Sunshine Coast at home next week, and the match will take on added interest because the team will be without the services of their senior players who be away on rep cricket duties. The Westies secured a tough away win against the Sunny Coast under similar circumstances in Round 11, so we’re anticipating an entertaining re-match next weekend!

The Wests girls made heavy weather of the start after electing to bat, losing opener Scarlett Varidel early and inching to 2/55 after 20 overs when Kinjal Dani was dismissed for a stoic 10 of 60 balls. They picked up the run rate in spite of continued very tight bowling by Ipswich-Logan until Isabel Goffage was caught for 41 off 76 balls. The Dogs fell in steady succession thereafter until a late flurry of 13 not out off 17 balls by Nicolene Snyman pushed their final score to a tough-to-defend 111 runs.

Wests bowlers got straight down to business when Lilli Hamilton bowled Macy Hauser off the first ball of Ipswich-Logan’s innings. Lilli followed up with two more wickets and a runout of four of Ipswich-Logan’s top five bats in her first fiver overs to have them reeling at 4/20. Sophie Martin snapped up two more wickets in short order and the Doggies were looking to be in good shape with only four wickets to winkle out and 70 runs to get.

And slowly, the tide turned. Ipswich-Logan’s Imogene Fisk-Walsh steadily pushed her teams total closer and closer to the target with the determined support of their lower order. The eighth wicket fell with the target still 42 runs away, but a long drought set in for Wests and with some loosening bowling and Imogen’s increasing confidence the game seemed to be slipping away…

…until with the scores tied Isabel grabbed the ninth wicket.

Hope flared briefly, but Ipswich-Logan snared the final run and took the win with two overs to spare.

Kudos to Wests girls for fighting to the end with their backs to the wall in a topsy-turvy game. Congratulations to Imogene who batted with flair to make 73 of Ipswich-Logan’s 112 runs.

Our girls sit in fourth place on the ladder and a gearing up for a fighting win next weekend against Valleys to play semi-finals cricket in March!