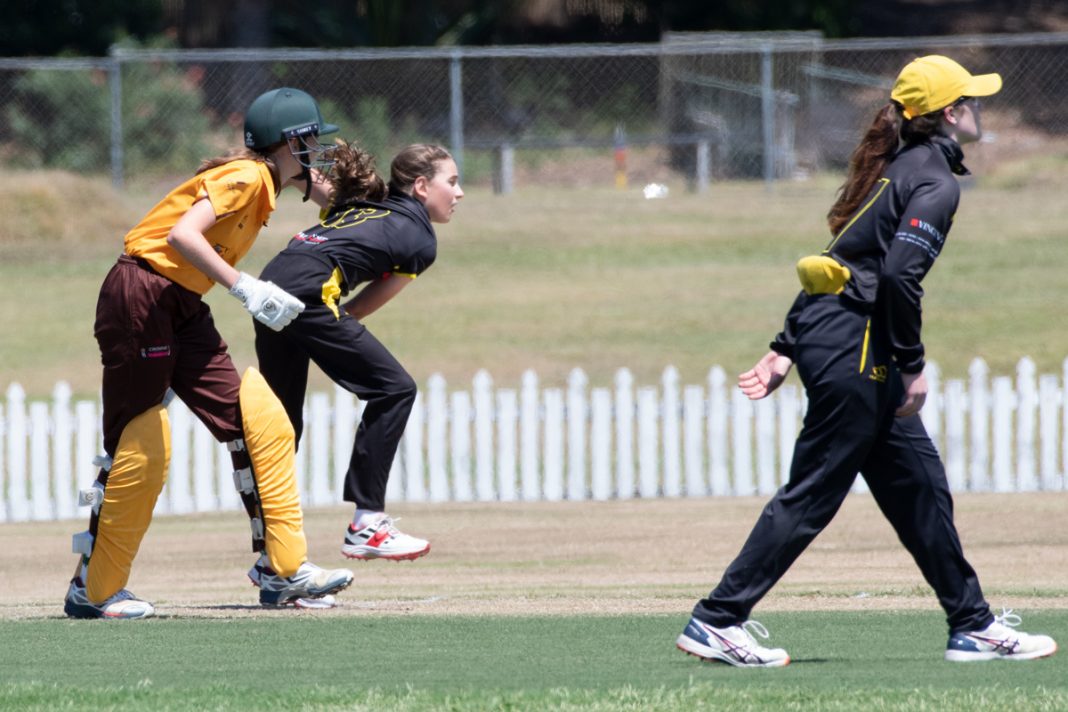 Our first grade girls chalked up two wins for the weekend of October 10 over the Hornets and the Dolphins on the Sunshine Coast but the second grade ladies went down to the bookworms. It was an interesting weekend…!

Wests captain Annie Wikman elected to use the rock first after winning the toss and the call immediately paid off with Lily Bassingthwaighte bowling the Hornets opener with the score on 3. A runout to Liv Steel and Lilli Hamilton followed by a sharp catch by Naiya Varidel at short midwicket off Lilli’s bowling kept the wickets flowing and the Westies in the hunt at 3/31. Ipswich steadied though and took the score to 71 before Lilli struck twice in two balls to reduce them to 5/71. Trinity Doyle and Clodagh Ryall combined to push the score to 100 in the final over before both were run out – Clodagh to Jess Bryant and keeper Scarlett Varidel and Trinity to a solo effort by Scarlett.

Lilli Hamilton took the honours with the ball with three wickets, Lily Bassingthwaighte finished with one and three runouts completed the complement of seven in total for 100 runs. Ash Sims also bowled well without luck, conceding just 13 runs from her 4 overs.

Wests batting innings started with a hiccup with a mixup resulting in the early runout of Naiya Varidel. Annie Wikman made up to the early wicket though with a dominating 70 not out off just 43 balls. Eloise Schabe and Liv Steel provided able support a Wests reeled in the total in just 13 overs.

Annie and Naiya got the girls off to a better start in this game with a 38-run opening stand before Naiya was trapped LBW to a ball that jagged back in. Annie again took the stick to the bowling attack, smashing 46 runs of just 24 balls before holing out to Carly Fuller off the bowling of leggie Tara Wheeler.

Eloise Schabe, Isabel Goffage and Olivia Steel carried on where Annie left off, piling on another 103 runs before Ash Sims and Olivia Totten came to the crease in the final couple of overs. Liv hit her first first grade runs on debut and capped off the innings at a imposing 184 runs.

The Gold Coast opening duo of Tara Wheeler and Carly Fuller launched the Dolphins innings with a blistering 61 runs from the first 6 overs before Tara was undone by Lilli Hamilton’s off spin and bowled for 34. Gold Coast wickets began to fall regularly with successive batters unable to stay at the crease long enough to establish a partnership with Carly. The run rate fell steadily and Carly was eventually caught by Liv Totten on the long on boundary trying to up the scoring rate. Lilli Hamilton pocketed a 3-fa for the second time in the day with Annie, Jess Bryant and Lilly Bassingthwaighte each also grabbing one each.

Our second grade girls winnings streak was cut off in it’s prime by a strong performance by UQ.

Wests batting innings started solidly before Claire Molloy fell, and fellow opener succumbed a few overs later to leave Wests under some pressure at 2/34. Wickets fell regularly from then on until Bec McCoombes and Erin Moran briefly steadied the ship with a 15-run partnership for the ninth wicket, before Bec was bowled. Erin and Ella Whish scraped out another 10 runs, before Ella’s wicket fell and the team was all out for 93.

Challenging day, girls. Enjoy your bye next week and better luck for your next game against Wynnum-Manly in a fortnight!