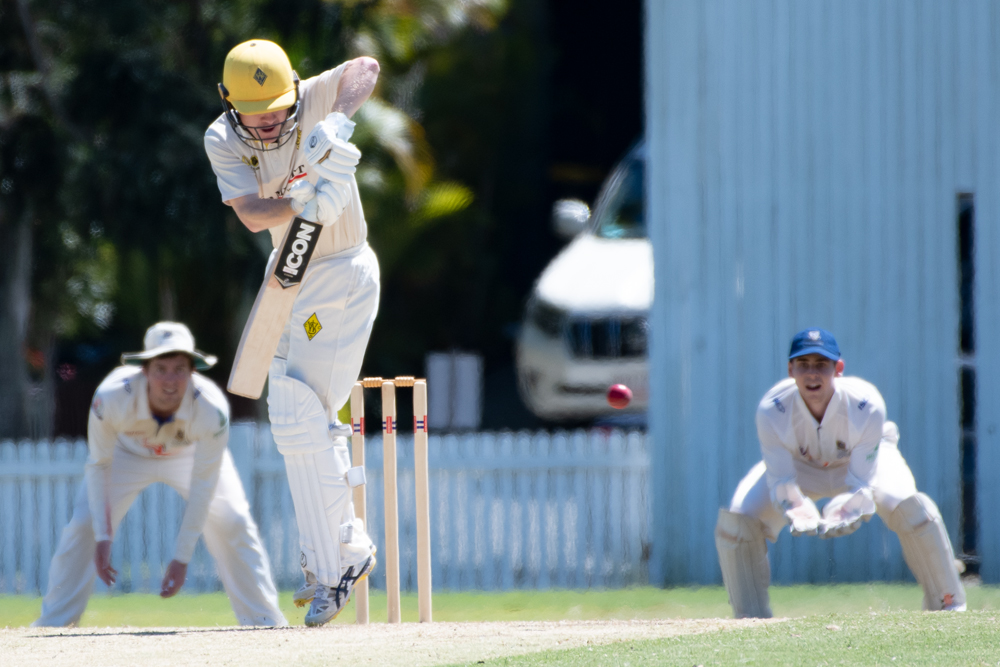 1st grade after already claiming 1st innings points against Norths were looking to claim additional bonus points to have them now sit atop the 2 day ladder. Wests resumed at 1 – 130 with overnight batters Snell and Truloff both already on half centuries. Snell fell early after a crisp cover drive for 4 to be dismissed for 61, there was then a little wobble in the middle order with McGiffin edging behind for 12 and Del Simone also edging to 1st slip for a duck. A mini partnership pf 49 between Truloff and Dennien steadied things and got wests to 5 – 228 when Dennien was dismissed for 31. In form Jarred Sippel then joined Truloff at the crease and shared in a 96 run stand with Sippel passing 50 and then being dismissed for 57. Truloff in that time had brought up his century and he and Dooley jetted wests to their last bonus point by passing 350 when the declaration came with Truloff 134 not out and Dooley 21 not out off 14 balls. Wests then had 38 overs to bowl in the afternoon to try and grab a few extra bonus points with Norths finishing 3 – 158 with Tom Whitney grabbing 2 wickets and Paddy Dooley 1 wicket.

3rd grade fell 52 runs short of Toombuls 232, Mikey Wilson fought hard with 67 from 100 balls and was well supported by Harry Weir 47 off 84 but it wasnt enough with wests all out for 180

4th grade went down to Toombul after toombul made 7 declared for 283 after wests made 131 in their 1st innings. Mitch Pearce was the pick of the bowlers with 3 for 72 off 21 overs and Zane Newton took 2 – 42. Wests were then 2-39 in their 2nd innings

5th grade had a 52 run win over Toombul after knocking toombul over for 110 after making 162. Youngster Toby Matthews snared 5 for 37 from 11 overs and skipper Steve Gramenz also bowled extremely well with 4 – 29 off 16 overs

6th grade went down by 50 runs to Toombul after Toombul set 184, wests were all out for 134, Murphy Veraa top scored and fought hard for 31 from 114 balls. Toombul then batted again and were 5 – 79 at the close of play with Oliver Richardson 2 – 23 the pick of the bowlers.

Tavs continued their superb season with a pummeling of Ipswich by 144 runs. Wests batted first and made 7 – 234 with Ravi Buttar continued his red hot form scoring 101 from 145 balls and was well supported by Michael Neumann with 47 from 69. Wests then skittled ipswich for 90 with all bowlers chipping in, Jake Kranen 2 – 19, Will Pamenter 2 – 10 and Isaac Barnes Cleary 3 – 17 the most damaging bowlers.

Our under 19s went down to a very dominant Gold Coast outfit on Sunday. Wests made 203 from their 50 overs, Danny Young was solid with the bat with 55 from 96 alongside Darcy Graham 65 off 93 balls. Gold Coast then ran the total down in just 21 overs with Gold Coast opener Judd Markham belting 135 from just 67 balls.

All teams take on Sandgate this coming round !!