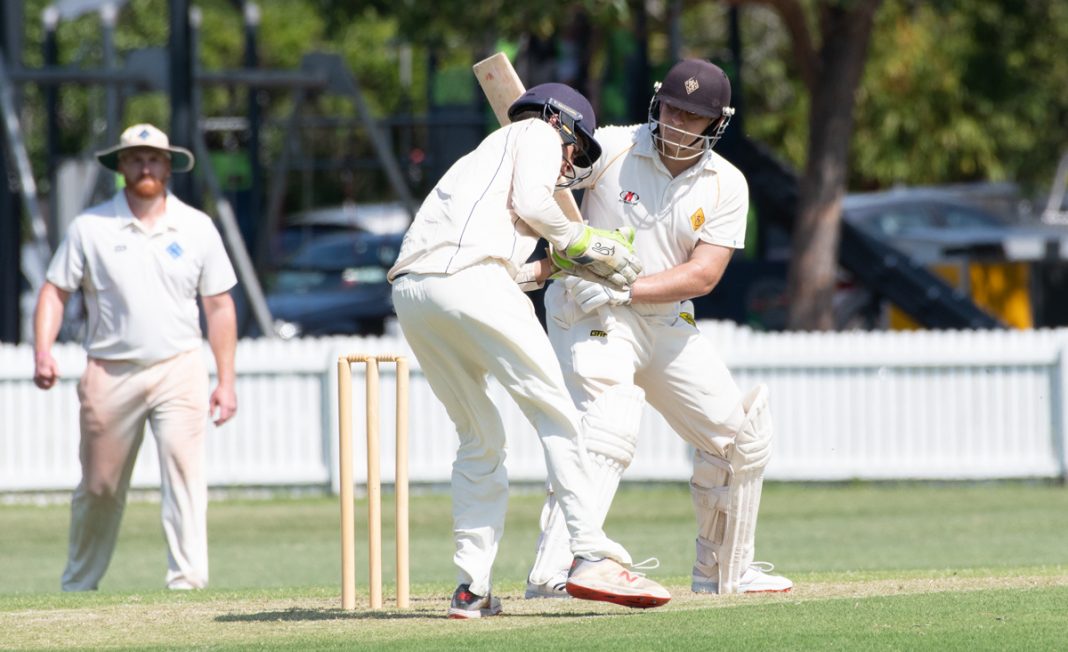 1st grade had to settle for a drawer against Sandgate at GMP1 over the weekend which still keeps them top of the ladder. Wests batted for 6 over in the morning with Truloff 115 not out and Darcy Murphy new to the crease, the pair got wests to 8-341 before a declaration came with Truloff finishing unbeaten on 136. Wests made a solid start with the ball on a benign pitch having Sandgate 2 – 75 at one point with the run rate hovering under 2 runs per over. Joe Fry on debut took a took and bowled to claim his 1st wicket in 2 day cricket in 1st grade. All the bowlers toiled hard throughout the day with Sandgate finishing the day 6-232, Joe Fry 2 – 44, Tom Whitney 2 – 45, Paddy Dooley 2 – 65 were the wicket takers.

3rd grade came agonizingly close to victory over Sandgate falling 1 wicket short, wests declared at 6 – 260 and had Sandgate 9-168 at the close of play. Luke Thompson 4 – 24, Mitch Pearce 2 – 27 were the main destroyers.

4th grade also held on for a draw with Sandgate, after finishing the day at 8 – 262 chasing 8 declared for 312. Darcy Graham 73, skipper Josh Buffett 78 were the main contributors with the bat.

5th grade had a comprehensive 4 wicket win over Sandgate after chasing down the gators 149 getting to 6 declared for 153. Murphy Vera 49, Zack Camilleri 43 and Lachlan Schubert 31 not out got the job done.

6th grade also had a dominant victory over Sandgate but 75 runs. Wests bowled Sandgate out for 128 after setting 8 declared for 203. Team skipper Luke Donaldson claimed a splendid 5 – 43 and the always contributing Nick Purser 2 – 22 off 20 overs.

A Darcy Graham century 115 was not enough to get our Under 19s over the line against Souths with Souths running down wests total of 307 with the loss of 8 wickets. Darcy Graham scored 188 runs over the weekend across his 4th grade and under 19s matches.

Our under 18 MSW CUP side went undefeated across their seasons 6 matches with two wests players being standouts in the competition
Leading Run Scorer:  Patrick Schultz.  114 @ 38*