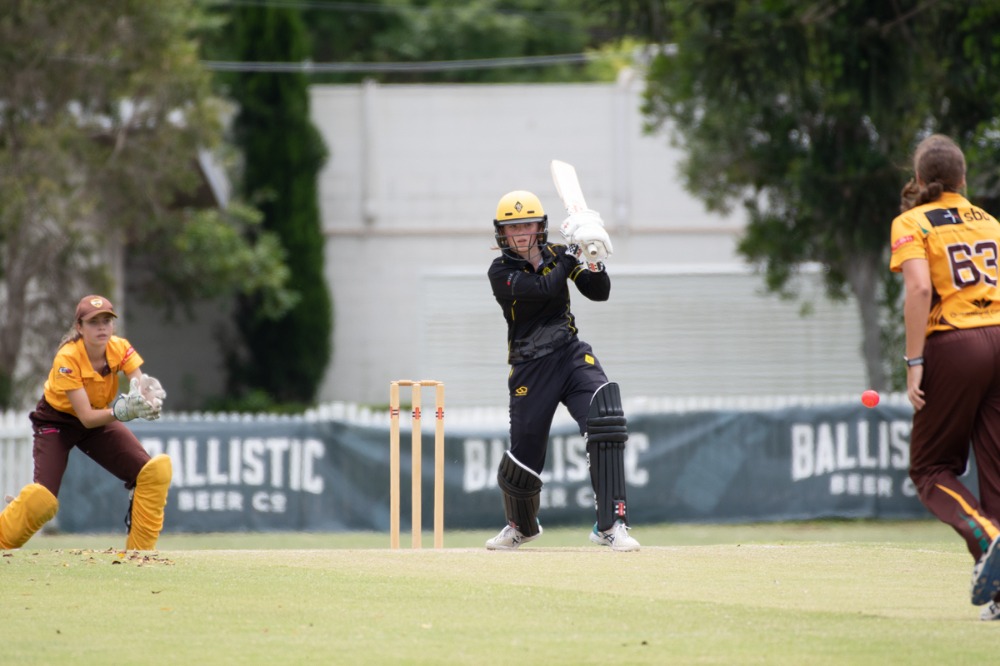 After the WBBL players left for their 2021/22 rep season the girls remaining at camp didn’t back down to any challenge and have shown their grit and determination over the past several weeks. Some games that arguably shouldn’t have been won were brought back home by the girls and this week was no different!

Ipswich won the toss and elected to bowl, sending in openers Annie Wikman and Lily Bassingthwaighte. Annie was placed to face the first delivery of the match but was then unfortunately dismissed soon after. However, Lily wasn’t going anywhere for a little while yet! Her and first change, Olivia Steel, built a 28 run partnership up to Bass’ departure in the ninth over. To round off the first inning from the Westies, Liv and Isabel Goffage hustled together 65 runs, conjuring a defensible target.

The second innings started to get away from the girls but nothing clouded their determination! Wickets began to fall left, right and centre, landing Ipswich in a sticky situation at 6 out for 69 runs after 15ov. The girls were then able to take home the win after holding the Hornets up by an excruciatingly close two run win!

The final game, extremely similar to the first one, came down to the wire. Wynnum sent the girls into bat and once again, Annie Wikman and Lily Bassingthwaighte into open. Lily copped a beating with her first delivery that caught her holding up on the shot,resulting in her dismissal. Annie flew to a solid 23 run stunt after seeing out both Lily and Eloise Schabe. Immediately after, Isabel Goffage was sent back to the sheds followed by Olivia Steel. The quick succession of wickets would rattle any team but the girls kept their heads and continued on fighting. The key partnership for the round was between Olivia Hartland and Tammy Cole who put up 43 runs at the end of the innings.

Lily Bassingthwaighte was to open the bowling from the Northern end of the field followed by the likes of Olivia Steel. Their opening spells sought justice to the previous innings and Wynnum were 3 out for 19 runs. A reasonable partnership made life a bit hard for the girls however, there was no relinquish and just like that, another three wickets were taken! The run rate stiffened but Wynnum weren’t going out without a fight. With only one wicket remaining in their camp, everyone were on the edge of their seats. The last ball came and two runs were needed to win. Captain Annie Wikman had the ball in hand and steamed in off the long-run. The ball was hit straight back and Annie swooped up the ball, took the stumps and topped off the second win of the day for the girls!

The dogs lost the toss and were sent in to bat. Scarlett Varidel and Claire Molly started the girls off for the day in the middle. Thirty-two runs into the partnership and Claire was dismissed, caught behind. Following her was Emma Lockwood and Scarlett. The next eleven runs saw the girls in a tricky situation, ending up 7 out for 81 runs. In to keep up the runs was Tanvi Aiyar, and Erin Moran, landing them with a total of 134 runs on the board.

First to bowl was Kyrna Crump and Erin Moran followed by the star bowler Rebecca McCoombes who took 3 wickets for 24 runs off of her stand-out eight overs. Unfortunately the Hornets stood strong this round, passing the Westies score in the 27th over.

Despite the result of the Second Grade Girls, the whole of the Women’s squad is commended for their efforts over the past month with the uncertainty of weather and the departure of the WBBL stars among us.